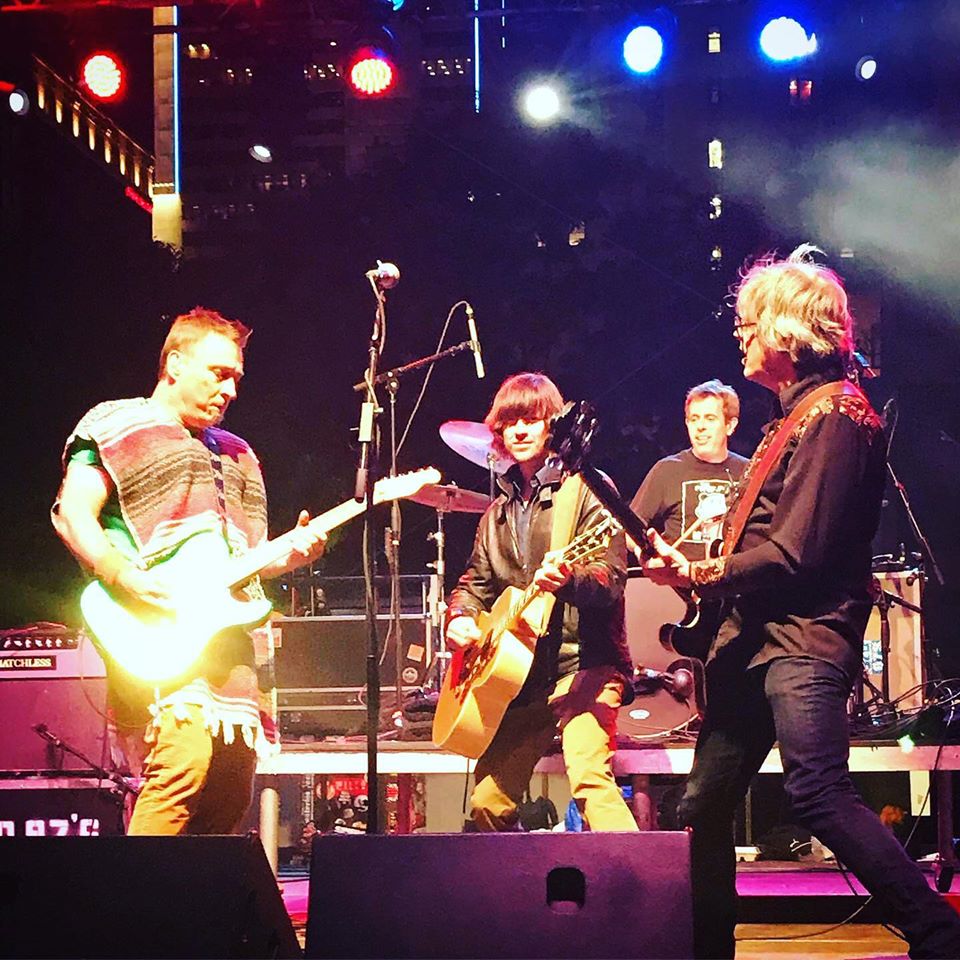 In 1996, Old 97’s recorded Too Far to Care. It was their major-label debut—following two independent releases and a year-long bidding war, the Dallas-based quartet had signed with Elektra Records. But rather than venture into some state-of-the-art studio in New York or LA, the band decamped to Village Productions in Tornillo, Texas, a remote facility in the middle of two thousand acres of pecan trees near the Mexican border, with a mixing board acquired from an engineer who had worked on some of Queen’s albums. Now over twenty years later, they have returned to record their eleventh studio album, Graveyard Whistling.

“Too Far To Care is the sound that best defined us,” says Rhett Miller, the lead singer and primary songwriter. “It was a really magical time, and we go back to it a lot in our collective memory.”

And so when it came time for the band—which still consists of the same four members: Miller, guitarist Ken Bethea, bassist Murry Hammond, and drummer Philip Peeples—to record their newest endeavor, producer Vance Powell brought up the idea of returning to Tornillo. “We knew instantly that it was the perfect move,” says Miller. “We weren’t trying to remake Too Far to Care, but to make something where fans would say, ‘This band hasn’t lost a step in twenty-some years.’”

The result is the eleven songs of Graveyard Whistling, from a group that has earned the respect and veneration as one of the pioneers of the alt-country movement, while still retaining the raucous energy, deceptive cleverness, and knockabout spirit that first distinguished them from the pack.  The record comes out blazing with the breakneck shuffle of “I Don’t Want to Die in This Town” (based on a possibly apocryphal quote from Frank Sinatra), and maintaining that feverish intensity even when the tempo drops on songs like the more contemplative “All Who Wander.” Echoes of such barroom saints as the Replacements and the Pogues appear on sing-alongs “Bad Luck Charm” and “Irish Whiskey Pretty Girls,” but bigger and more mature issues simmer underneath the steamroller swing.

Returning to Tornillo was more than just a novelty, and proved key to the album’s direction. At some point renamed Sonic Ranch, the studio has been expanded and updated, but the band went back into the same recording space. They even stayed in the same bedrooms—Miller opened the drawer of his nightstand and found a note that he had written twenty years earlier.

“The time-travel element can’t be overstated,” says the singer. “It was a beautiful feeling of completing a circle—we’re the same people, but we had grown so much as bandmates and friends. It really made me believe in the power of experience and that you do get better with time. We’re capable of so much more now than we were two decades prior, but it also felt like we just took a coffee break in 1996 and now here we were, sitting back down to make a new record.”

After all this time, Old 97’s also found themselves in the interesting position of following up the most critically acclaimed, highest charting record of their career, 2014’s Most Messed Up. “We didn’t expect that kind of reception for Most Messed Up—in the current climate,” says Miller. “It was very cool, and weird, a great feeling but also a newfound pressure.

Knowing that he wanted to consider as many options as possible, Miller handed over a “huge pile of songs” to the band; they whittled his thirty selections down to fifteen, with producer Powell pulling a few back from the discard pile. “Before, my ego might have been attached to some songs,” says Miller, “but now we’re so far beyond petty squabbling, everybody is so open-minded, I was willing to give up on songs, or be surprised that I was wrong even when it took playing a song 75 times to really find it.”

The emotional range and musical scope of Graveyard Whistling also benefits from the contributions of some remarkable co-writers. Miller had long wanted to collaborate with Nicole Atkins when they found themselves with one hour together backstage at Chicago’s City Winery. Her sketch of a chorus and a wordless bridge developed into “Those Were the Days,” the album’s closer. “We were just making each other laugh, but it added up to something bigger,” says Miller. “It has the feel of a John Irving story, chronicling an entire life from a place of real experience.”

“Drinkin’ Song,” co-written with Butch Walker (who has worked with the likes of Taylor Swift, Fall Out Boy, and Keith Urban), revisits territory that has long been at the heart of the Old 97’s work. “I’ve made a career out of singing songs that glorify drinking,” says Miller, “so I wanted to battle with the idea of drinking as a lifestyle, the role it plays in our lives and the fetishizing of it—even if we did end up with something you can swing a beer mug to.”

The first single from Graveyard Whistling, “Good with God,” features Brandi Carlile. As Miller was writing the song, he realized that the character of God in the lyrics was a woman, and he approached ATO Records label-mate Carlile with the idea of finishing the song and singing the response part in the voice of the heavens (“It’s not bad company—her, George Burns, and Morgan Freeman,” notes Miller).

“[The album] grapples with spirituality and mortality,” he says. “Our songs normally hide deeper meanings in the subtext, but they’re more on the surface for this record.” Setting out to respond to the themes raised on Most Messed Up (which Rolling Stone described as a “round of airtight songs celebrating life-as-sublime-train-wreck”), Miller says that they considered album titles like The Hangover or The Aftermath. “That felt like the theme to me—dealing with knottier ideas, taking a light-hearted approach to something much bigger.

“The trick Old 97’s have held on to is to take a song that may have a darker theme and present it as something to be screamed along to in a club. I don’t want to sing sad songs in a sad way. You don’t even realize there’s a tombstone sticking out in the middle of it until the eighth or tenth listen.”

There aren’t more than a handful of bands in history who can claim to have an intact, unchanged line-up as they approach twenty-five years together. There is, of course, no real blueprint or rulebook for sustaining the kind of chemistry that Miller, Bethea, Hammond, and Peeples enjoy.

“I think our longevity can be attributed primarily to our friendship and ability to overcome those moments when egos want to overtake and obliterate everything in their path,” says Miller. “We experienced the hype of the old business model, with all of its excess and idiocy, and also the deconstruction of that model and the advent of the new world, and been able to maintain a fundamental love for each other.

“We’re just very lucky to be able to do this for a living. It’s insane and beautiful and we never, ever take it for granted.”